Skip to content
As usual, Mercedes-Benz has made each rival stop in its tracks and check what it needs to improve one its flagship sedan to compete with the S-Class going forward.

The battle of the heavyweights in the luxury sedan segment has been going for ages, and even though it restarts every seven years or so, no other luxury carmaker has managed to dethrone the mighty Sonder Klasse.

Now that the W223 generation of the uber-sedan is here, we thought it would be appropriate to see how it stacks up against two of its most fierce rivals, the BMW 7 Series G11 and the Audi A8 D5.

Since there is plenty to talk about when it comes to modern luxury, we figured that we should start with how the German trio looks inside and out first, leaving aside the engines and features that each model offers to a future article dedicated to them.

The first thing that will draw the most attention in the beginning and the reason most people form an opinion about one car or another is obviously the exterior design. Some say that it’s the inside that counts, especially in the luxury segment, but we should probably get to that later on.

While the BMW 7 Series G11 is the oldest of the three, its mid-cycle facelift, or LCI in BMW-speak, has made it look not only fresher, but it’s probably the most avantgarde. Not only that, but its gargantuan kidney grille occupies the most real estate in BMW history, giving it a more ‘I have arrived’ front-end look than its rivals for the first time ever. 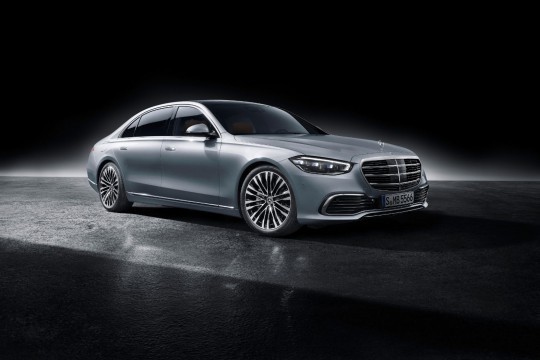 There are also a lot more horizontal lines on the 7 Series compared to the much more swoopy S-Class and high-tech A8. Speaking of which, despite Audi continuously threatening us with a paradigm shift in the carmaker’s design language for the past few years, the A8 D5 looks like a facelift for the D4, which in turn looked like a facelift for the D3 and so on.

Sure, the latest D5 generation has the largest so-called ‘single-frame’ grille compared to any of its predecessors, but pretty much every one of its most poignant design features has been carried over.

For some, the inconspicuous Q-car look of the A8 is a plus, but it sure can’t win many new customers for the brand if it keeps rehashing the same design elements over and over again. 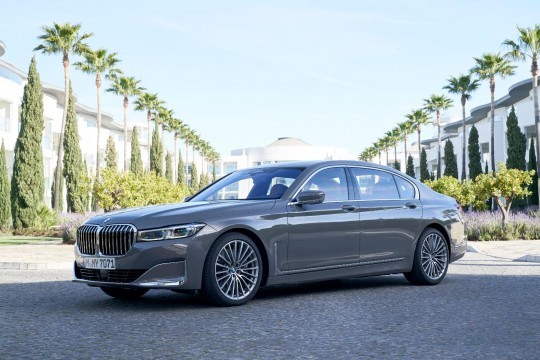 On the other hand, the all-new Mercedes-Benz S-Class W223 is walking a middle path between the very different styles followed by its competitors.

While the low-rear end and ‘emerging from water’ stance is continued from its predecessor, each and every design motif has taken and abrupt turn.

The slimmer headlights no longer hug the now more-imposing Mercedes grille, while the taillights are horizontal for the first time on an S-Class since the mighty W126. 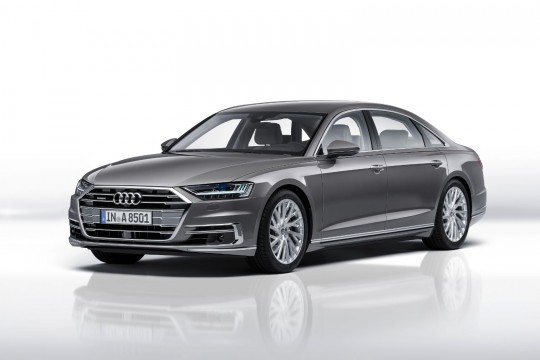 The end result is a bit conflicting, since the front- and rear-end are probably less cohesive than before, especially compared to its rivals.

Beauty is obviously in the eye of the beholder, but if we were to make a case for the most impressive-looking (not the most beautiful) German luxury sedan at this point in time, the S-Class W223 would probably share second place with the Audi A8 D5. Despite (or maybe thanks to) its controversial kidney grille, the 7 Series G11 LCI arguably has more presence if it doesn’t feature the vulgar M-Sport design package.

Inside it’s where opinions will definitely split even further between the three gladiators, especially since the design themes are vastly different between them.

While high-tech looking and impressive at its launch 5 years ago, the LCI update didn’t manage to do much for how generic the 7 Series G11 interior looks nowadays. If you’ve been inside a 3 Series G20 but never in a current 7 Series, just add a few more inches here and there and now you have.

All the design motifs and button arrangement are similar across the BMW sedan lineup no matter their size or price, which is good news for the cheaper ones but not so good for the flagship, which doesn’t seem to add that much value apart from space and the quality of materials. 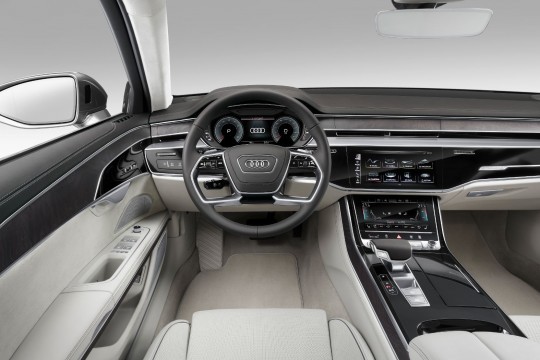 Things are a lot different in the Audi A8 D5, whose interior design is almost nothing alike with any of its smaller and less expensive brothers.

The center console features almost no analog buttons, with most of the functions being operated via two touchscreens set at different angles. Meticulously penned horizonal lines dominate the A8’s interior, and the overall feel is that of a futuristic living room, not a car.

Sure, customers are already complaining about a sea of fingerprints all over their center console and those touch screens will look extremely outdated in a few years, but at least Audi tried to make something different for a change. 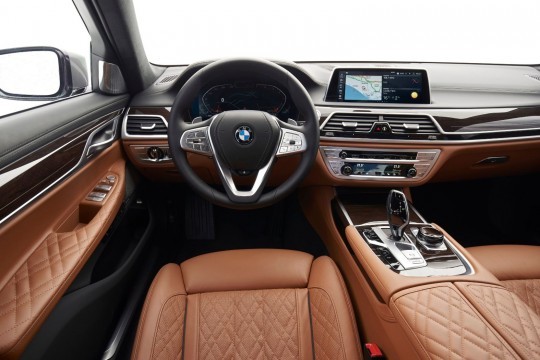 While the mellow-looking exterior might have you confused, it’s inside where the S-Class W223 has truly turned the tide, with not a single design motif being reminiscent of its predecessor, or any other current Mercedes-Benz for that matter.

For the first time, the Sonder Klasse is now almost devoid of analog switches and buttons, with the center console now being home to an immense touchscreen with haptic feedback that appears to be flowing in the space between the seats.

The round AC vents of its predecessor are now vertical slats on each side and rectangular in the middle, with the ones on top of the touchscreen being positioned a bit toward the passenger, somewhat reminiscent of how they were positioned in the W140 S-Class. 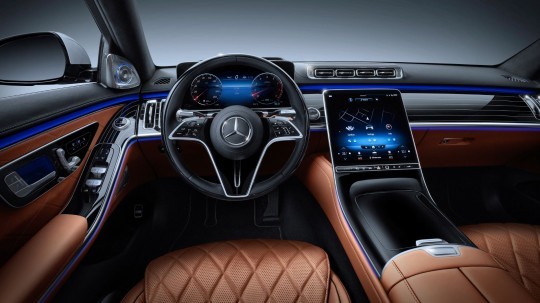 The overall ambiance is that of a high-tech luxury yacht, despite the square footage of the central touchscreen being ahead of the one found on the A8 D5.

Overall, the Mercedes looks to have won on the ‘presence’ scale, with the A8 coming in second place and the BMW last, but we should probably reserve further judgement until we get a seat in a well-specced version of each car.

In the end there can’t be a single winner when it comes to how the German luxury triumvirate looks inside and out, but the battle between them has probably never been as heated as it is now. What’s your take on the design of the three?

Thu Sep 10 , 2020
Amie T. Keener is a registered interior designer and associate at Gensler. Many people may have set up their home offices not expecting to be there for the long haul, but it’s becoming increasingly clear we may be home for several more months. Now you may be scrambling to create […] 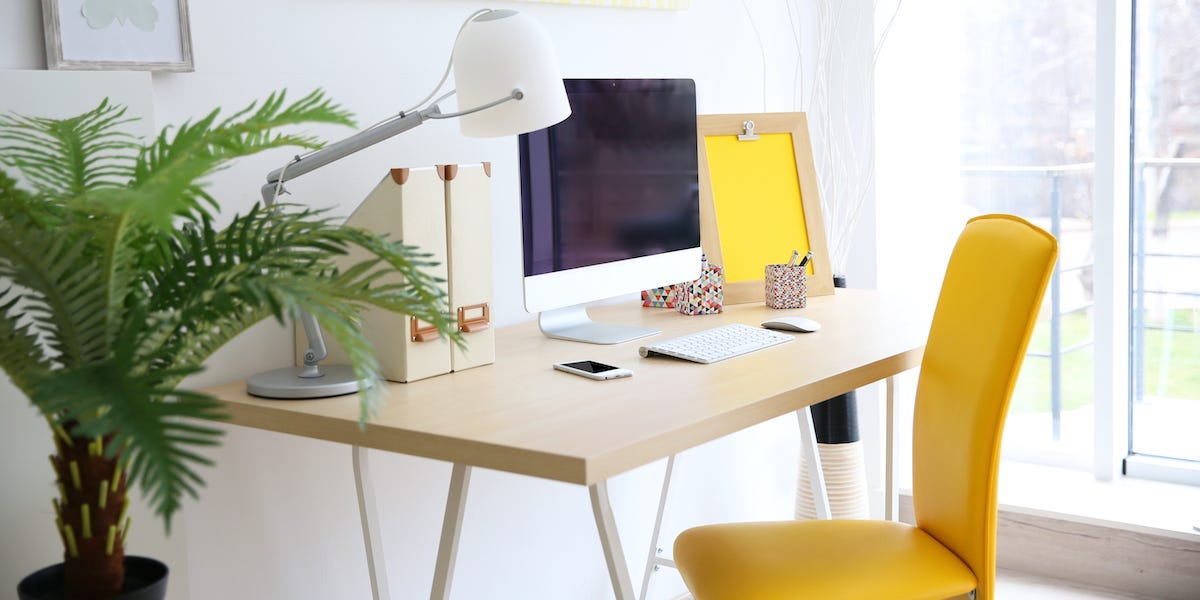