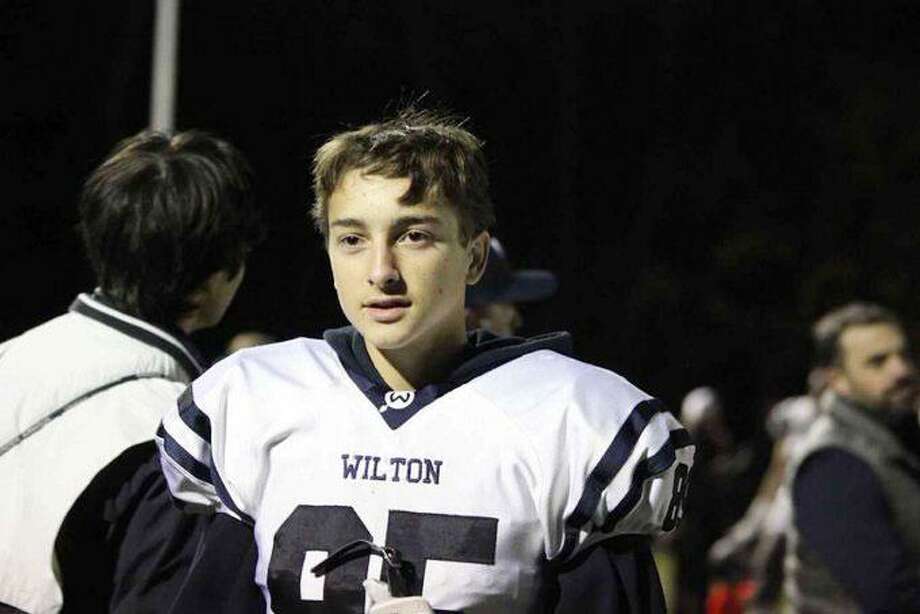 George DiRocco, 16, who died unexpectedly on Monday, Sept. 21, 2020, is remembered fondly by friends for his positive attitude.

Sommer and other Wilton High School classmates have been struggling to stay upbeat since DiRocco’s unexpected death on Monday.

DiRocco, 16, died from an “undetected heart condition,” according to an obituary notice. The state’s Chief Medical Examiner’s office is conducting an autopsy and said Thursday the cause of death is “still pending further studies.”

A memorial was set up in the junior lot at Wilton High School to honor the memory of George DiRocco, who passed on Sept. 21, 2020.

A memorial was set up in the junior lot at Wilton High School to honor the memory of George DiRocco, who passed on Sept. 21, 2020.

Sommer, 16, recalled many good memories he had with DiRocco, including bonfires at his home and just sitting around and talking.

“George’s dad was a coach, and after practice, we had what we called ‘Friday night dance parties’ where we played football-kickball, that is kickball using a football, with a football cone used for home plate,” he said.

Sommer will always remember DiRocco for his upbeat personality.

“He had a positive attitude and tried to make everyone happy in his own special way,” he said.

“George always had a smile on his face and lightened up the room. I don’t think I ever heard anything mean or negative from him, and that is what made him special to me. He was there to cheer and comfort you. He really was just a spectacular friend and I’m really going to miss him,” he said.

A memorial to honor DiRocco was set up by 30 of his friends across two parking spaces in the junior parking lot at Wilton High School. A handmade poster says, “Rest in Peace George.”

A GoFundMe page has been set up for the DiRocco family, with more than $41,000 raised as of Thursday morning.

DiRocco was born and raised in Wilton where he played football and was a star player for the Wilton High School baseball team.

“He was the type of kid who would do anything you asked,” football coach E.J. DiNunzio said. “He was always a joy to be around. As a coach, you always like to have players like George.”

DiRocco, described in his obituary as a “longtime” Dallas Cowboys and New York Mets fan, is survived by his parents, Arthur and Deborah DiRocco, and his siblings Nikolas, Arthur (R2), Victoria, and Kayla.

“George loved to both watch and play sports with friends and family, when not playing Xbox with friends or running around the yard with his beloved dogs he was making everyone in his world laugh,” his obituary reads.

A funeral service will be held at 10:30 p.m. Saturday at Riverside Cemetery, 81 Riverside Ave., Norwalk. The family will also hold a memorial service at a later date.

The Wilton Warrior Gridiron Club has set up a scholarship fund in George DiRocco’s memory to go to a teammate who demonstrates selflessness on and off the field.

Fri Sep 25 , 2020
The spacious interior of the Audi Q2 accommodates five passengers. The interior design echoes the taut design language of their exterior. The air vents and the gear lever knob, or selector lever of the S tronic, have a new look. Q2 customers can order the interior S line instead of […]